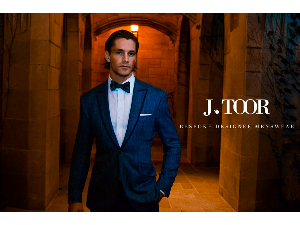 Celebrate Marriage! Get two English-made custom suits for the price of one! Buy one suit valued at $2010 or more (featuring Loro Piana Luxury Italian Fabric), and receive a second suit of equal or lesser value for free.
J.TOOR in the 900 N. Michigan Ave Shops: A speakeasy for the sartorial gentleman.