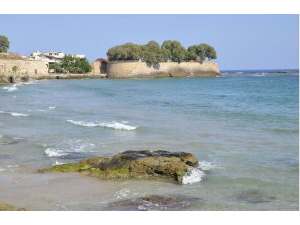 Located in Koum Kapi, Greece (translation: Gates of Sands), home is a 2 bedroom apartment that sleeps 4 with a full kitchen.

Short walk to beautiful, warm water beach;
Nearby Venetian port East wall overlooks the beach and port and the old town inside. It is full of shops, clubs, cafes, museums, galleries, excavation sites and activity.

To be scheduled on a mutually agreeable date.