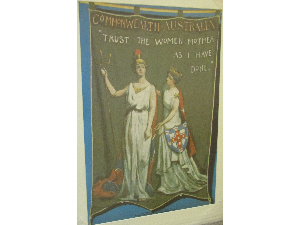 Framed print of Dora Meeson Coates 1908 banner, 'Trust the Women Mother As I Have Done' Original carried by Australian suffragettes in the Women's Suffrage Coronation Procession in London, 1911, and now hangs in Australian Parliament.