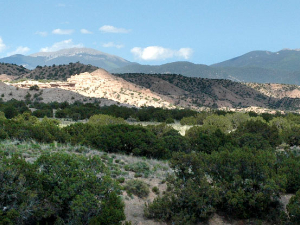 One week stay in Santa Fe home. Though just a 10-minute drive to downtown Santa Fe and the Opera, you won't want to leave this magnificent home designed by Chicago architect, Jim Nagle. Perched on a hilltop of 5 acres, with spectacular vistas of the Jemez Badlands and the Sangre de Cristos. Expansive stone patios amidst fountains, fire pit and spa! Fireplaces in living room, family room and kitchen. 3 bedrooms, 3 baths. Must be used within 90 days.