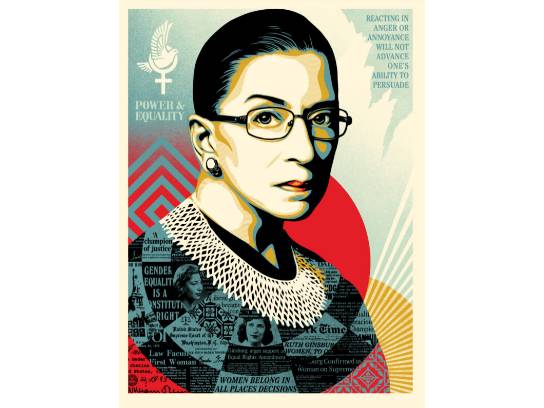 Print is signed by both Shepard Fairey and Ruven Afanador.

Artist's Statement
"Ruth Bader Ginsburg is a hero of mine because she was a low-key radical. She encountered gender discrimination in her personal life which she overcame with perseverance and professional excellence, allowing her to infiltrate the male-dominated system and change that system from within to benefit women's rights and equality under the law. Ginsburg's accomplishments are inspiring, including founding the Women's Rights Project at the American Civil Liberties Union before being appointed to the Supreme Court in 1993. Ginsburg was a champion of justice philosophically, but she worked tirelessly to manifest her ideas about justice in real-world policies.

RBG was legendary for her work ethic, getting by on only a few hours of sleep and prolifically writing important opinions, often dissenting powerfully. Justice Ginsburg always stood up for equality with a degree of dignity and civility that was unassailable. I admire her ability to work with people she disagreed with and attempt to win them over rather than react with anger. Ruth Bader Ginsburg, thank you for being a role model in both style and substance."