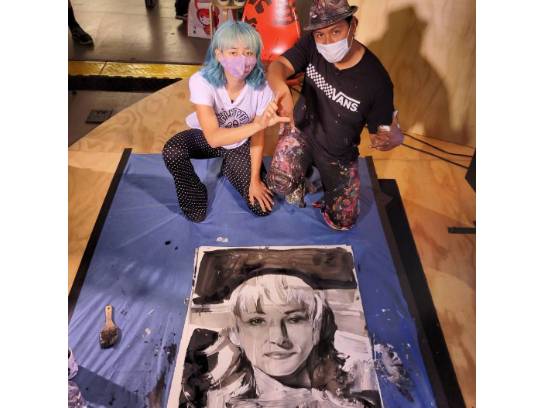 Contemporary artist and LACHSA alumni, Robert Vargas will paint a one-of-a-kind portrait of the winning bidder in his signature live painting style at a location to be determined.

Robert Vargas is best known for his mixed-media portraits, murals and live events. He was born and raised in the Los Angeles neighborhood of Boyle Heights. Vargas is a leading creative force in the revitalization of Downtown LA's art scene.

His paintings and drawings infuse classic genres of portraiture and nudes with an avant-garde explosivity that not only captures the visage and likeness of his subjects but seems to excavate the intimate aspects of their character. Vargas selects his subjects intuitively at his highly attended live-painting sessions, creating powerful and sublime representations of the human connection through his portraiture.

His visual vocabulary pulls from life experience, a viscerally sensual approach to line and texture, and an almost mannerist choreography of abstraction and representation that combine to unforgettable effect in his portraits.

In 2013, Vargas was a key figure in helping Los Angeles lift its street art ban while creating his masterpiece, "Our Lady Of DTLA" a four-story mural on Spring street in the heart of downtown L.A. In May 2011, Vargas was named one of LA Weekly's People of the Year and was featured on a limited-edition cover of the issue. His public mural works both in Los Angeles and throughout the world, he sees as a means to reach a wider audience and promote accessible art and community through the creative process.

Robert is currently working on his biggest project yet: a fourteen-story mural in DTLA that will rank as the largest mural in the world by a single artist.

Date to be scheduled at a mutually agreed upon date before 12/31/21.