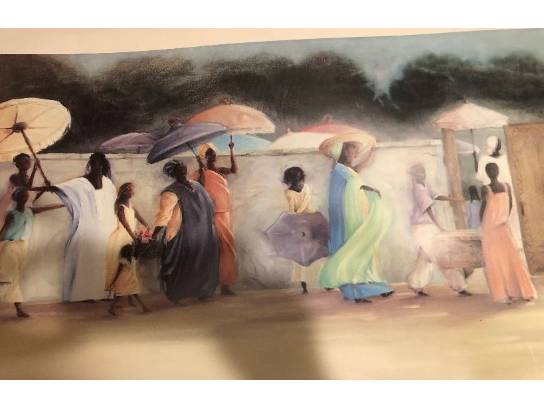 Add to your art collection with a framed artwork piece by Earl Jackson titled "Following the Path."

A crucial experience in the formation of Jackson's mature artistic personality was two trips he made to Africa in 1985 and 1988, first to Senegal and then to Kenya. After these voyages, Jackson's art was deepened by a layer of awareness of the way that many aspects of African-American life had their roots in African backgrounds. The culmination of this new awareness was "Following the Path," a painting that took Jackson a year and a half to complete. The painting depicts a group of women and girls, several holding parasols, walking along a stone wall. Influenced by music, they seem to be reenacting some ancient practice or ritual. Rendered in pastels and composed of an unusual collection of geometric shapes (the curves of the women's dresses, the circles of the parasol tops, the long rectangles of the wall), "Following the Path" suggests both lightness and strength."