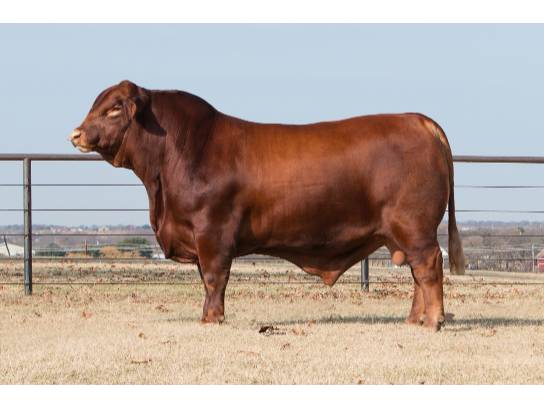 CEO is a true power and performance Red Brangus herd sire. However, he is power with style and quality, being the named the 2018 World Brangus Congress Grand Champion Red Brangus Bull. He was also the 2017 Reserve National Grand Champion Bull and Reserve Grand Champion in San Antonio. He is one of the heaviest muscled, deepest sided, boldest sprung sires to be seen in recent generations.

CEO is the heir apparent to one the most powerful Red Brangus sires to ever walk, Lazy 3 Statesman 100S. The 2007 National Grand Champion, Statesman remains one of the most sought-after sires by Red Brangus breeders from around the world. CEO's dam is the proven and much-admired TRIO's Wildfire 175W, the two-time National Grand Champion, Show Heifer of the Year & Show Dam of the Year. Her progeny includes a long list of national grand champions, popular sires highly productive daughters.

His progeny are proving his genetic merit at herds across the Brangus world with reports of top progeny from South Africa to Argentina and Brazil and across the border in Mexico. Here in the U.S. his daughters have been distinguishing themselves in the showring with a Grand Champion banner at the 2019 Brangus Futurity and consistent contenders.