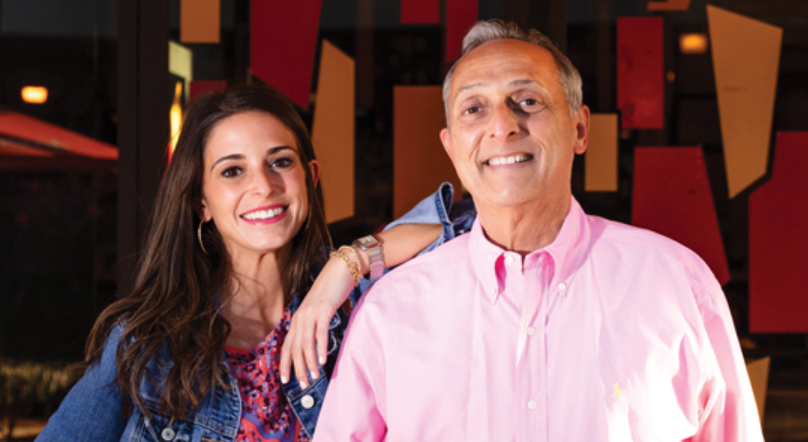 Alumni John Marion Carrabba '79, owner of Piatto Ristorante, and his daughter Jessica Carrabba '14, are co-chairs of the 10th Anniversary Two Saints & A Taco Tasting event, being held this year on the University of St. Thomas campus and virtually.

Alumni and friends are invited to attend the taco tasting competition and scholarship fundraiser from 6:30-9:30 p.m. on Friday, June 11, 2021 on the UST Academic Mall. Guests can enjoy tacos from several Houston-area competing restaurants, along with St. Arnold microbrews. Plus, there will be a wine garden this year.

"The dynamic duo of John Marion and his daughter Jessica Carrabba brings excitement and enthusiasm to the 10th anniversary, because they are both alumni of the University and have a great family history and legacy with UST," said Carla E. Alsandor, senior director of Aalumni Relations.

John Marion served as a celebrity judge of the event twice before, once with his daughter, and he and Jessica are part of a multi-generational legacy at UST. His mother-in-law worked as an administrative assistant for the former nursing school in the 1980s; his wife, Janice, attended St. Thomas.

For Both Carrabbas, Relationships Are the Key to Business
John Marion credits the relationships built at UST for his positive experience, something he practiced in the bank industry for 13 years and that he now carries into the restaurant work. "What I loved about UST and love about it to this day is the personal touch," he said. "People want to be recognized. Whether you're a bank receptionist or teller, it's the same thing here in the restaurant business; it's the personal touch."

Building relationships is part of Jessica's work too, as an accounting consultant at Southern Glazer's Wine & Spirits, where she helps clients, including her dad, create menus. "I don't know if it's a genetic thing or if it's being in the restaurant industry, but I'm a people person," Jessica said. "I love helping people." Jessica, who has a business degree in marketing from UST, worked alongside her father at Piatto while in college.

Jessica said as a legacy student at St. Thomas, it was fun to see what had changed and remained the same as her dad's experience. "There were professors I had that my dad had when he was there," she said. "But the campus and so much had changed. There wasn't a marketing degree when he was there. Social media wasn't a thing. Cell phones and laptops weren't a thing. It was nice to see the differences."

Father, Daughter Work Together as a Team
John Marion said he has enjoyed working with his daughter as co-chair of Two Saints. "She's the smart one as far as the marketing, the new ideas, the new generation ideas," he said. "I'm just the old man that still has the old ideas. We're taking those ideas and mingling them together."

Jessica said it works well with each giving their input. "Working for him, I learned a lot of business skills and we're in sync when it comes to business," she said. "I look up to him so much. It's nice watching him in his element."

John Marion is happy to see business picking up again in his Uptown area restaurant, after a tumultuous year due to pandemic restrictions. "I haven't seen some customers in a year," he said. "Since the vaccinations started up, regulars are here every weekend."

But Two Saints & a Taco Tasting will be held in person this year, with precautions in place. Despite the social distancing, John Marion and Jessica both said they are looking forward to the camaraderie with the alumni who attend.

John Marion invites alumni to get involved: "Please get out and support our University and enjoy a night of great food and beer, along with your family and/or friends. If you can't make it, please consider giving a donation for the student scholarships."