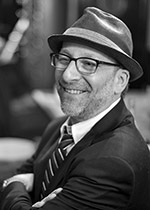 Jon is a successful composer and producer, but his skills as a musician launched his career-recording and performing with John Lennon, Tom Chapin, Loudon Wainwright III, John Denver, Laura Branigan, Henry Gross, Phyllis Hyman, and many other outstanding artists. If you've heard John Lennon's recording of Stand By Me-or  hundreds of other well-known recordings, TV ads and radio jingles-then you know Jon's work as musician, composer and producer.

Jon is best known as a pianist, but he also plays organ, synthesizer, accordion, guitar, bass, and drums, sings lead and backup, and has a state-of-the-art studio where he's earned five Grammy nominations.

When he's not in the studio or on tour you can often find Jon doing what he loves, playing keyboards and singing in clubs around the New York area.  Whether he's working with world-famous artists, recording a jingle that will be heard by millions on TV, or rocking live in a friendly club-Jon makes music!