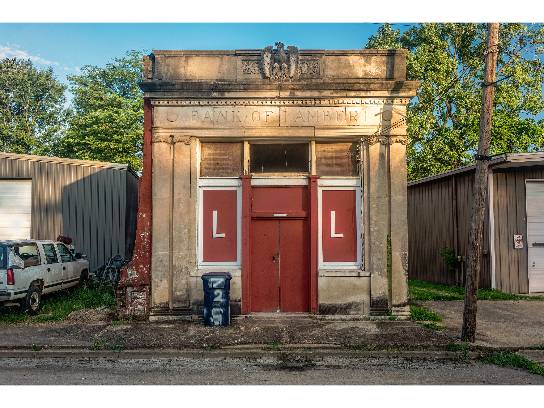 ARTIST'S STATEMENT: COVID has made many of us take stock and reassess priorities. We had lots of deferred maintenance at our place in Sumner;MS; but a January tornado and the pandemic forced us to reckon with all the cans we had kicked down the road. This July after a few months of repairs and a new roof I was good and ready to strike out, as safely as I could. I resurrected my 8x10 view camera and decided at dawn or dusk to visit little towns around me in the Mississippi Delta, mask at the ready. Layers of decay seem to always find me, or me them. This bank in Lambert, MS repurposed as a club is now part of a whole series I'm calling Tuesday's Just As Bad, cadging a line from T-Bone Walker's song They Call it Stormy Monday.

ABOUT THE ARTIST: Langdon Clay was born in the middle of a hurricane in New York City in 1949. He grew up in New Jersey and Vermont and went to school in New Hampshire and Boston. He got his first camera on St. Patrick's day 1968. His first roll of film was of Robert Kennedy leading the parade in New York. Three months later the presidential candidate was assassinated. Clay moved to New York in 1971 and spent the next 16 years photographing there and around the country and in Europe for magazines and books like JEFFERSON'S MONTICELLO by Howard Adams and Burgandy cookbook MY CHATEAU KITCHEN by Anne Willen. In 1987 he moved to Mississippi and has worked from there with his wife photographer Maude Schuyler Clay. They have three adult children; Anna, Schuyler, and Sophie. His book CARS - New York City, 1974-1976 was published by Stiedl in December 2016.