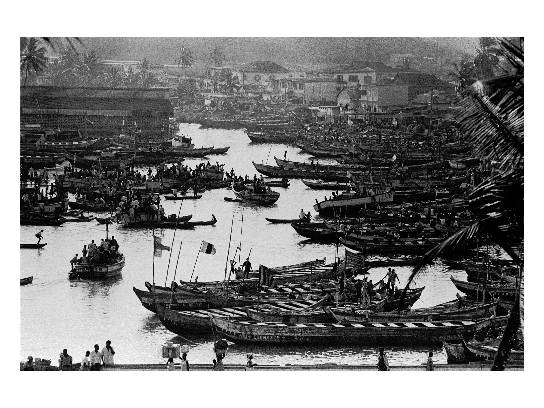 INCLUDES BOOK "Let Not the Sinuous Worm Strike Me" with an introduction by Ambassador Andrew Young. This is a publication produced by the Carter Center, featuring my photographs from Ghana while documenting the Carter Center's efforts to eradicate guinea worm disease in Africa and Asia. The book was sent to all members of Congress in order to inform them of the disease eradication efforts and encourage support from the US government.

ARTIST'S STATEMENT: Fishing boats returning to the Elmina, a fishing village on the coast of Ghana, at the end of the day. Elmina is known for a Dutch slave trading fort which is where I was standing when I took this photograph.

ABOUT THE ARTIST: Billy Howard is a commercial and documentary photographer and serves on the board of Atlanta Celebrates Photography. He was a 1990-1991 Southern Arts/National Endowment for the Arts Fellow and a 2012 Rosalynn Carter Fellow in Mental Health Journalism. He covered the first Palestinian elections with former President Jimmy Carter and has been featured on Good Morning America, CBS This Morning, and other national and local media for his documentary work. His book "Epitaphs for the Living: Words and Images in the Time of AIDS" was the first full length photo documentary book on the AIDS pandemic. Images and ephemera from that project are collected in The Library of Congress, The High Museum, and in Emory University's Rose Library.