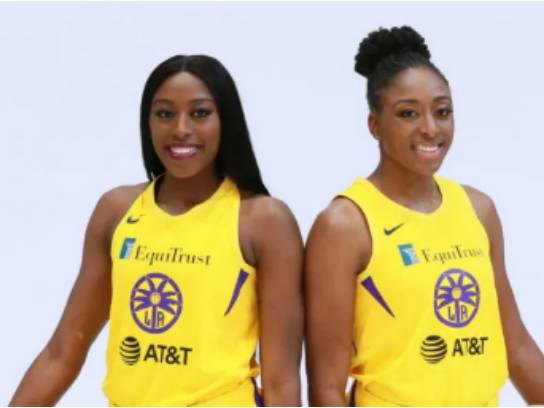 Nnemkadi Chinwe Victoria is a Nigerian-American basketball player for the Los Angeles Sparks of the Women's National Basketball Association (WNBA), after being drafted No. 1 overall in the 2012 WNBA Draft. Soon after being drafted, Ogwumike signed an endorsement deal with Nike. She is the older sister of Chiney Ogwumike, who also plays for the Sparks. Ogwumike was named WNBA MVP for the 2016 WNBA season; as well as winning the WNBA Finals that year in 2016.

Chinenye Ogwumike is a Nigerian-American professional women's basketball player for the Los Angeles Sparks of the Women's National Basketball Association (WNBA). As of 2020, she became the first black woman to host a national radio show for ESPN, also being the first WNBA player to do so. She was one of the first and youngest commentators ever to be named a NBA analyst for the network covering the NBA, WNBA, and variety of sports, while simultaneously playing in the WNBA. Chiney is a graduate of Stanford University, who majored in International relations. She played in three Final Fours and finished as the conference leader in scoring and rebounding as of January 3, 2014. As of 2016, Ogwumike was elected Vice-President of the WNBA Players Association, and signed an endorsement deal with Adidas.[2] In May 2018, Ogwumike signed a multi-year contract with ESPN to become a full-time basketball analyst.