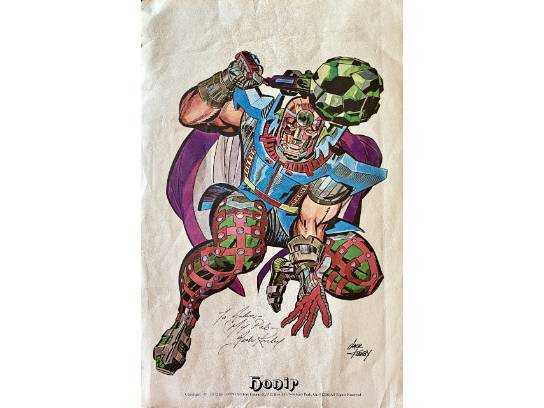 This 11.5" x 17.5" color print of Honir is from Kirby's Gods Portfolio (Communicators Unlimited, 1972) and is signed by the artist himself to actor John Ritter: "To John - My Pal - Jack Kirby"

This item is priceless and very rare and has been framed to keep it's condition. Minor creasing and edge wear.

Jacob Kurtzberg, best known by his pen name, Jack Kirby, was an American comic book artist, writer and editor, widely regarded as one of the medium's major innovators and one of its most prolific and influential creators.

In 1940, he and writer-editor Joe Simon created the highly successful superhero character Captain America for Timely Comics, predecessor of Marvel Comics. During the 1940s, Kirby regularly teamed with Simon, creating numerous characters for that company and for National Comics Publications, later to become DC Comics.