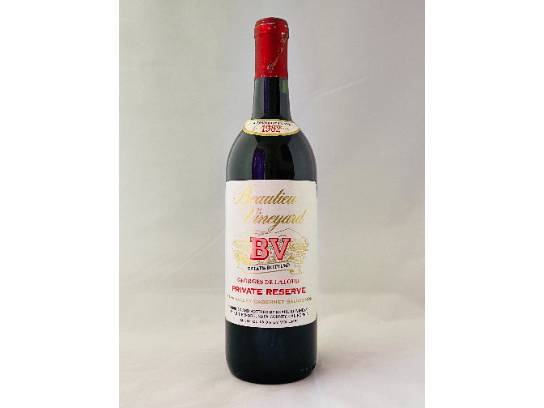 Medium fully ruby-mahogany color. A still youthfully ripe and berry-mint bouquet heralds a wine still capable of further development. While there is a touch of acidity, the flavors are firm, minerally and laced with lovely Bordeaux-style cedar and black cherry nuances. There is good fruit in the finish, with fine tannins. A wine of structure and intensity without over ripeness.

One of the finest examples of the 1982 vintage, this wine has been a reliable performer for over a decade. It is one of only two B.V. Private Reserves made during the decade of the eighties to merit an outstanding rating. The 1982 exhibits a saturated dark ruby color with only slight lightening at the edge. The nose offers copious quantities of sweet, jammy, red and black fruits intertwined with plenty of spicy, toasty new oak. Ripe, full-bodied, opulent, and fleshy, this sumptuously-styled Private Reserve is drinking well.