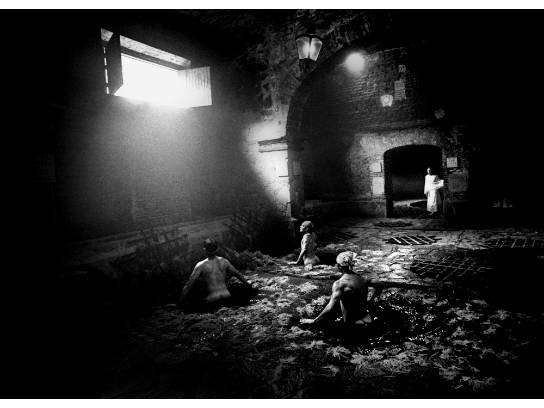 Image Description: Throughout Mexico's complicated, often violent history, one drink, an ancient sacrament and gift from the gods, has remained a constant in the culture: tequila. Blue Agave, the source of tequila, has been cultivated, fermented and enjoyed for over 9000 years. Over time many traditions and rituals were born, later incorporated into and modified by conquering cultures. It was in the 1500s that the Spaniards applied their brandy distillation technology to fermented agave juice to create what we call tequila.

This photograph was taken at one of the oldest distilleries in Mexico, where they still produced tequila using naked "tequileros" and methods handed down from pre-Columbian Indians.

Photographer's Bio: Menuez has worked covering stories as a photojournalist for The Washington Post, Time, Newsweek, LIFE, USA Today, Fortune and many other publications. He has explored such subjects as the homeless crisis, the Ethiopian famine, the Oakland drug wars, the Olympics, and the AIDS crisis. His work recording the rise of Silicon Valley from 1985-2000, resulted in his book Fearless Genius: The Digital Revolution in Silicon Valley 1985-2000,, an Amazon Photo Book #1 Bestseller. His many awards and honors include the Kelly Awards, the AOP London, the Epson Creativity Award, and the International Photography Awards. His work has been exhibited in solo and group shows in Asia, Europe and the US, and is held in many private collections.