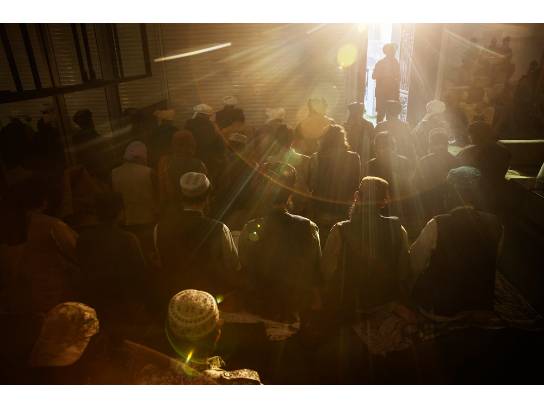 Image Description: Fighters loyal to Taliban commander Qari Salahuddin say their evening prayers at their temporary base in one of the homes belonging to Abdul Rashid Dostum, a notorious Afghan warlord who fled the country, on September 7, 2021. I made this picture three weeks after the fall of Kabul to the Taliban. I arrived in Afghanistan mid summer, and made the decision to stay as the Taliban rapidly took over the country, one of the few western journalists to do so. This picture was made in the home of a brutal warlord, Abdul Rashid Dostum, who fled the country and these Talibs had occupied it.

Photographer's Bio: Victor J. Blue is a New York based photojournalist whose work is most often concerned with the legacy of armed conflict, human rights, the protection of civilian populations, and unequal outcomes resulting from policy and politics. He covers national and international news stories for major newspapers and magazines, shoots documentary photo projects that accompany the conflict in Afghanistan and post-conflict Guatemala, and maintains a personal documentary practice that spans decades.

His photographs have appeared regularly in The New York Times, as have been published in The New Yorker, Harpers Magazine, The New York Times Magazine, Smithsonian Magazine, The Wall Street Journal, The San Francisco Chronicle, among other publications, and on The Discovery Channel and The History Channel. He has earned a total of 7 Pictures of the Year International awards and 5 National Press Photographers Association Best of Photojournalism awards, among other awards and citations.