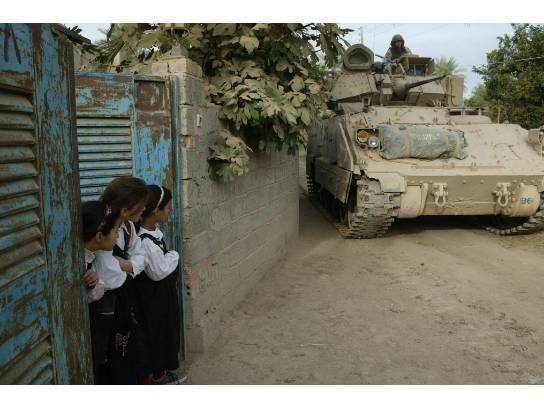 Image Description: School girls watch from their door as troops from the 4th Infantry Division carry out raids on homes in Balad, Iraq following attacks on American troops in the area.

Photographer's Bio: Mike Kamber, co-founder of the BDC, worked as a photojournalist and conflict photographer for 25 years, covering a dozen conflicts around the world for 12 years for The New York Times. As one of the first journalists to routinely file photography, video and written articles from overseas, he helped pioneer the use of multimedia in journalism. His photos have been published in nearly every major newspaper and magazine in the US and Europe. A former Revson Fellow at Columbia University, Kamber has won a World Press Photo award and been nominated three times for the Pulitzer Prize. In 2012, he published Photojournalists on War: The Untold Stories from Iraq.