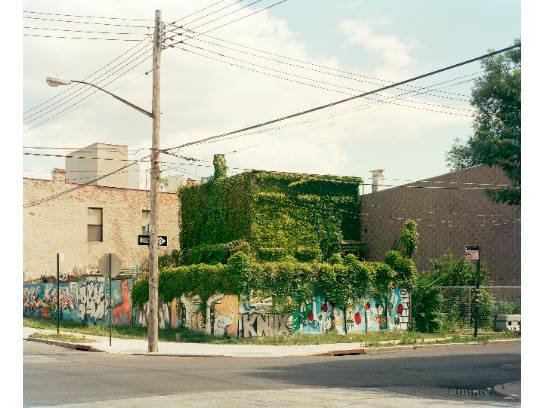 Image Description: This photograph was captured on large format 4x5 film, and is part of a 13-year archive of work Doskow created while living in the Brooklyn waterfront neighborhood of Red Hook Brooklyn, 2003-2016. This house was adjacent to the artist's house; she spent years studying the structure, until feeling it was in its optimal state of verdant beauty, and only then did she create the image (2011).

Photographer's Bio: New York-based architectural and landscape photographer Jade Doskow is known for her rigorously composed and eerily poetic images that examine the intersection of people, architecture, nature, and time. Doskow is best-known for her work Lost Utopias, Freshkills, and Red Hook. Doskow holds a BA from New York University's Gallatin School and an MFA from the School of Visual Arts. She is the subject of the 2021 documentary Jade Doskow: Photographer of Lost Utopias; the film's New York premiere will be at the International Center of Photography in October 2021. Doskow was one of 50 women featured in the award-winning 2018 publication 50 Contemporary Women Artists from 1960 to the Present. Throughout her work, a sense of timeless monumentality in juxtaposition to modern details highlights surreal aspects of the contemporary cityscape. Doskow's photographs have been featured in the New York Times, Aperture, Photograph, Architect, Wired, Musée Mag, Smithsonian, Slate, and Newsweek Japan, among others. Doskow is on the faculty of the International Center of Photography and the City University of New York. She is represented by Tracey Morgan Gallery in Asheville, NC. Doskow is the Photographer-in-Residence of Freshkills Park, New York City.