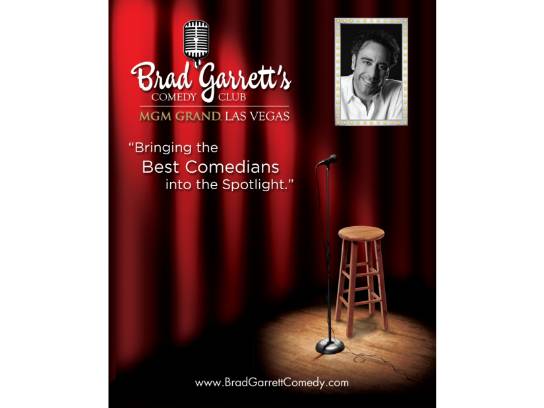 Four VIP tickets to Brad Garrett's Comedy Club at the MGM Grand in Las Vegas in section one. Included a meet and greet with Brad Garrett IF tickets are booked on a date when Brad is performing.

Brad Garrett's Comedy Club has been proudly located at the MGM Grand in Las Vegas since opening its doors in 2012. The venue is the epitome of class, customer service and old-school Vegas charm.

Brad Garrett won three Emmy's and a SAG Award for his role as "Robert Barone" on the iconic television series Everybody Loves Raymond. He was also nominated for an Emmy and SAG Award for his portrayal of The Great One in the telefilm Gleason.

Garrett's trademark voice has been heard in over 30 animated features, including the contemporary classics Finding Nemo, Ratatouille, and Tangled. Garrett's film credits include David Chase's Not Fade Away as well as Music and Lyrics, Suicide Kings and Woody Allen's Sweet and Lowdown.

Garrett's stand-up career has spanned over thirty years and he was one of the youngest comics ever to appear on The Tonight Show with Johnny Carson. In the late 80s, he opened for Frank Sinatra and Sammy Davis, Jr. in Las Vegas.

Said Garrett, "When I had the opportunity to build the ultimate comedy club, I wanted a venue that captured the ambiance and style of the 1920s in New York. Those were times when renovated warehouses were turned into speakeasies and small theaters, creating an intimate atmosphere with great entertainment. We are now proud to be known for our top-notch entertainment and unparalleled customer service. We deliever both nightly in the basement of the MGM Grand."

With its signature red curtains, an amazing staff, and the best comics on the national circuit, Brad Garrett's Comedy Club is THE place to be for comedy on the Las Vegas Strip!

Please note that show times, dates and even the club location have been changing due to COVID-19 restrictions. Winner will need to confirm these details before booking and again 48 hours before scheduled show date. Reservations must be made at least one week in advance, and dates are subject to availability. Tickets must be redeemed by 3/11/2022.