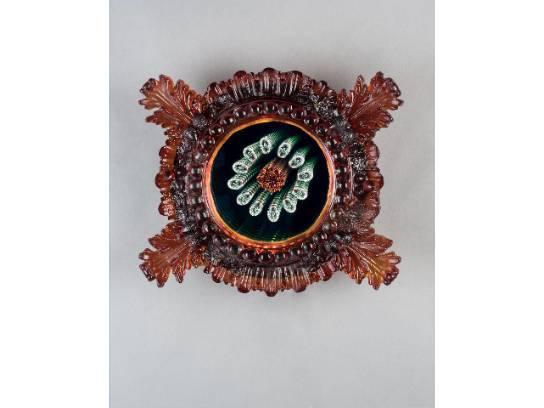 About the Artist: Tim Tate is Co-Founder of the Washington Glass School and Studio. Tim's work is in the permanent collections of a number of museums, including the Smithsonian's American Art Museum and the Mint Museum. He is the subject of several articles in American Style, American Craft, and Sculpture magazines, as well as the Washington Post and Times newspaper reviews. He was also the 2010 recipient of the $35,000 Virginia Groot Foundation award for sculpture.

He taught in Istanbul in August 2007 and at Penland School on several occasions. In 2009 he received an award from the Museum of American Glass in New Jersey as one of the "Rising Stars of the 21st Century". He received his Fulbright Award from Sunderland, University in England in 2012. He is also the founder of "Glass Secessionism". Tim shows his work at numerous International Art Fairs, such as ArtBasel Switzerland, Art Miami, SOFA and Frieze, London.

"In my endless mirrors, I try to entice the viewer to look deeply into and completely experience my windows into alternative dimensions. My works create an optical and bodily illusion of infinity through apparently limitless space. There is an intimacy implied by viewing deeply into a circular opening, as if peering through a portal to witness another endlessly repeating reality. These pieces create a visual space that doesn't actually exist in reality, but claims volume none the less. We literally look into a dimension that doesn't share space in this world." - Tim Tate