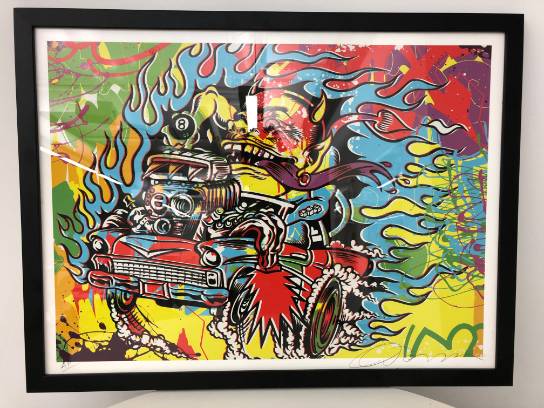 Title: Hot Rod Demon
Year created: 2014
Medium: Giclee (digital print)
Edition: 1/1
Height (inches): 24
Width (inches): 36
Depth (inches): 1
Signed by the artist
Signed Area: front
This piece is framed.
Artist bio:
Artist and designer Jim Evans, aka TAZ, learned his trade in the San Francisco underground rock scene. He has illustrated comics, album covers, rock and film posters, as well as advertising and magazine illustrations. Evans is the founder of the TAZ collaboration, which is responsible for hundreds of gig posters, album covers, and rock ephemera. TAZ has turned out numerous posters for bands like the Foo Fighters, U2, Oasis, Porno For Pyros, Green Day, Pearl Jam, The Beastie Boys, Ramones, Rage Against The Machine, Wu Tang Clan, Metallica, and Nine Inch Nails. TAZ also did a number of high profile album jackets for The Beastie Boys, Beck, Aerosmith, House of Pain, and Neil Young. More recently he has done posters for Bad Religion, the Pixies, and Blink-182. TAZ work has been exhibited and disseminated in galleries worldwide, and featured in numerous books and articles.