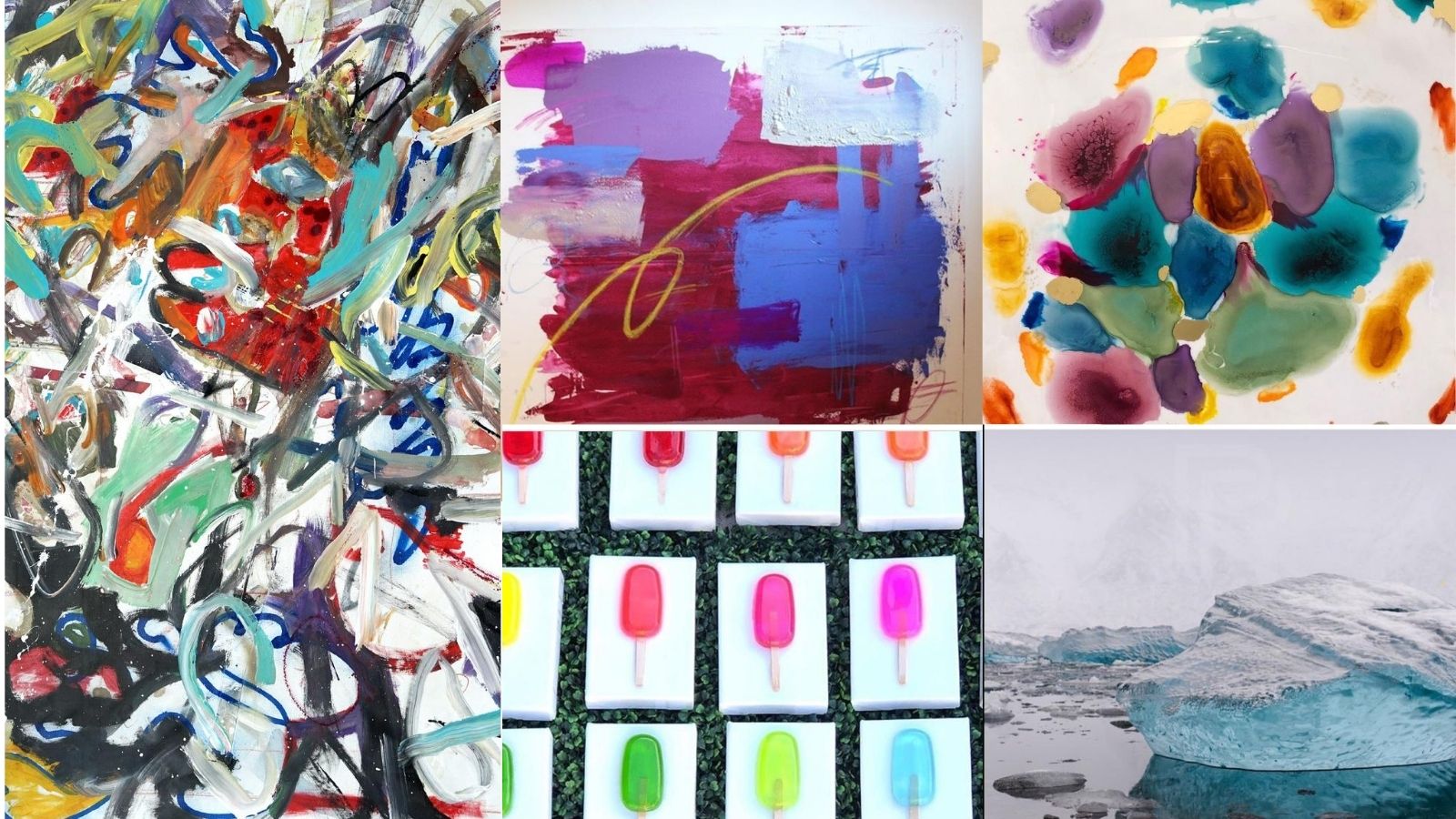 John Ross Palmer, born in 1974, is a third generation Houstonian and fifth generation Texan. He is most proud of earning the distinguished Eagle Scout in 1991. Palmer began painting full-time after the tragic loss of his father in 1998. After first humbly showing his paintings at Houston-area bars and restaurants, his artist career has taken a meteoric rise to international acclaim. Palmer has self-published six books: Deliverance & More than Words (2003), Escapism (2004), Seven Years (2005), Jane & Co. (2010), Faces (2012) and The 52 Project (2015). His critically acclaimed, professionally-published book, The Art of Meaningful Living (2009) with author Christopher Brown, made its debut at the Book Expo America in New York City in May 2009 and was available in bookstores nationwide. Palmer has created dynamic art series all over the globe, including: Barcelona, Florence, Buenos Aires, Skopelos Island (Greece), Vienna, Cape Town, Tokyo, Berlin, Dublin, Jerusalem, Săo Paulo, Nice, Port of Spain, Havana, Auckland, Bogota and most recently Hoi An (Vietnam). The elite group of patrons that support his international travel, known as The First Class Club, celebrated their 10th Anniversary in 2019. Palmer is the Founder of the Art Movement of Escapism. His Escapist Mentorship Program, founded in 2009, furthers his mission to forever destroy the stereotype of the struggling artist. Annually it has applicants from around the world. He owns the chic and contemporary John Palmer Art Gallery & Studio, a massive compound in the heart of Houston's Historic Heights. For his dedication to the Space City, the GHCVB selected Palmer as a member of the My Houston Campaign along with notable Houstonians including Beyoncé Knowles, Clay Walker, Hilary Duff and George & Barbara Bush. The artist's online presence is colossal with hundreds of thousands of followers on Facebook, Twitter and Instagram. His artwork is in the private collections of President George H. W. Bush, President George W. Bush, his Holiness the 14th Dalai Lama, American filmmaker John Waters, the late, famed comedienne Joan Rivers, Trinidad & Tobago's Prime Minister Kamla Persad-Bissessar and the Crown Prince of Saudi Arabia, Mohammad bin Salman bin Abdulaziz Al Saud. Palmer is a lively lecturer, having made speeches around the USA about his Art Movement of Escapism, including a feature presentation at President Bush 41's 20th Anniversary Points of Light Conference. In 2013, Palmer was honored as one of the few living artists with a page on Wikipedia. That same year Palmer launched the massive Refuse to Struggle Campaign-a groundbreaking endeavor to construct an Escapist Gallery & Studios for the free use of his "Escapist Artists." Palmer raised all building funds in only 46 days through a combination of private donors and a public crowd-funding operation on Indiegogo. The innovative "Chrysalis" training center that includes gallery space, artist studios and a visiting artist residence was completed in 2014. Palmer's commitment to volunteering has been recognized by his receipt of both the League of Women Voter's President's Medal and the Greater Houston Service Award. October 19, 2013 was proclaimed to be John Ross Palmer Day in the City of Houston by Mayor Annise D. Parker. He is known worldwide as the Hardest Working Man in the Art Business . In 2016, Palmer founded and now serves as the Chairman of the Board of Directors for the 501(c)(3) nonprofit Art Launch that manages and funds his mentorship program. Art Launch has raised hundreds of thousands of dollars to improve artist entrepreneurial programs and maintain the Chrysalis. 2018 marked the 20th Anniversary of Palmer's career as a professional artist and the occasion was distinguished by a five-day Retrospective highlighting his service, mentoring and most notable paintings. Joining the likes of Queen Elizabeth II and President Barack Obama, in January of 2019 Palmer laid a wreath at the Tomb of the Unknowns at Arlington National Cemetery. That same year, Palmer completed the third and final phase of his legacy series, Satori, by placing all eighteen paintings in private collection prior to the public unveiling. Palmer married his husband Ryan Lindsay in 2007 and they have two English Pointers, Bobby and Nancy.

Thaddaeus J. Arvie, a Louisiana native, is a resident and working artist in the city of Houston, Texas. Arvie received his Bachelors of Fine Arts from Grambling State University in 2011. Shortly after, he moved to Houston in pursuit of more opportunities.

In early 2013, Thaddaeus began participating in small underground art shows and markets. As he worked on perfecting his craft and maturing into his own style, Arvie managed to get some experience with murals. Arvie worked alongside the Mayor of Ville Platte, Louisiana to transform two buildings for the Boys & Girls Club in 2016 and 2017. He has also worked with Houston proprietors such as Franklin's Tower, Inside Out bar and the Cheesecake Factory to bring unique artwork to their business environment.

In Houston Arvie also began to host his own small underground events. By trial and error, he learned to become an event planner, creative director, and all-around self-managing artist. Beginning in 2014 to the present, Thaddaeus has produced a total of ten successful art + music events.

In 2020 Thaddaeus Arvie was accepted and initiated into John Ross Palmer's prestigious Escapist Mentorship Program. This unique opportunity has already been a great learning experience on how to navigate the mainstream art world. Thaddaeus will receive training through an empowering program that provides studio space, intimate interactions with collectors, and also one-on-one coaching with Palmer, a full-time, established artist.

Sarah Rimboch is an American artist and educator living and working in Houston, Texas. Sarah currently teaches art at an elementary school in the Spring Branch ISD while simultaneously working towards her goal of being a full-time artist. Rimboch is best known for her abstract resin paintings, but she is prolific and has the ability to work with a broad range of mediums.

Sarah was born and raised in Huron, Ohio. From 2007-2012, Sarah studied at Bowling Green State University in Bowling Green, Ohio. She graduated with a Bachelor's in Arts Education with a focus in Printmaking. In 2013, Sarah moved from Ohio to Houston, Texas. The move and search for employment forced her to take a break from art and focus on her teaching career. Three years later, although she loved and excelled at her job, she realized that her life lacked inspiration as she had no personal, creative outlet. This self-realization brilliantly coincided with Rimboch stumbling upon the medium of resin. It was kismet.

Rimboch then dedicated two full years to building a substantial body of work. After being inspired and encouraged by an artist friend, she applied and was accepted to exhibit at Houston's First Saturday Arts Market. From the onset she experienced success and it propelled her to seek more experiences to display publicly. Sarah has now regularly shown at outdoor art markets throughout the Houston area and notably the Friendswood Art in the Park Festival.

In January of 2020 Sarah was accepted into John Ross Palmer's Escapist Mentorship Program where she will be learning entrepreneurial skills from the Escapism Founder for an entire year. Sarah ranks this as her most significant art accomplishment to date and knows that it is the actual beginning her art journey.

Sarah Luna is grounded in movement and constant change from a military upbringing for most of her childhood and early adolescence.  Her father is a 25-year, retired Army pilot Vietnam Veteran from Richmond, Indiana partnered with an equally resilient, tough-as-nails, style-savvy Thai native from Chiang Rai.

After her father's retirement from the Army in West Point, NY, her family settled in Sugar Land, Texas, where Sarah grew up and eventually returned to live after her undergraduate work.

Sarah holds a degree in English and Secondary Education from Howard Payne University, where she also played competitive tennis. She taught high school English for two years and subsequently earned her Master's degree in Education- Counseling, while teaching full-time, through the University of Houston-Victoria. During this time, Sarah gave birth to her first daughter.

She spent her earlier career as a high school teacher and counselor at Elkins High School in Missouri City, Texas where she gained her inspiration and enthusiasm for working with adolescents and advocating for marginalized individuals/youth of society. Getting kids to walk across the graduation stage with all societal odds against them are her greatest professional achievements even to this day. The relationships built with her students in this time continue to profoundly impact her. This is also while in Sarah's early thirties, during summers off, she began painting as a means of self-expression, to decompress from work and finding herself in a new role as a single mother. As a result, the spark and importance of creating took on a much larger role in Sarah's life.

In 2011, Sarah married her husband, Sam Luna, and moved to Houston where she presently works as the Director of Wellness at an all girls' college preparatory high school, St. Agnes Academy.
Following the birth of her second daughter, Sarah began the school's first Wellness Department with a comprehensive model that cultivates the importance of mental health awareness and advocacy.
In 2014 she became a Certified Daring Way(TM)  Facilitator and uses the work of Dr. Brene Brown in her work in counseling and facilitating groups.  She is also featured on Brene's website in Daring Educators training videos and presents to educators on how this work is implemented in a school setting and counseling department. Sarah is honored to help facilitate change in teenagers' lives, and she continues to enjoy walking alongside adolescents in their most vulnerable and challenging phase of development.

In 2019 Sarah was featured in a documentary with a generous acknowledgment from a former student in Travis Scott's Netflix documentary, "Look Mom I Can Fly" where he credits her for "saving his life" while in high school.

Sarah's path to becoming an artist is grounded as a means of survival for self-care as she navigates motherhood, career, heartbreak and trauma and continued life transitions.  As life presents new unchartered territory, Sarah's work and creativity evolve with direction and deeper purpose.
She credits her close friends, family and therapist, Vicki Simmons, who encouraged her to give more attention to her creative side and cultivate it in her present identity.
Sarah applied and was accepted into John Ross Palmer's Escapist Mentorship Program in 2020 where she is learning how to navigate a growing art business.

She runs The Aramco Half-Marathon in Houston each year and hopes to reach 10+ consecutive races.

Sarah lives in Houston with her husband, Sam, and her two daughters.

Patricia's main medium is photography and photography inspired work, crossing over into film, rituals, installations and sculpture. With a bachelor in Graphic Design & Visual Communications (Emily Carr University of Art and Design, Vancouver, Canada) and two years at the FotoAcademie (Amsterdam, NL) she was most recently awarded her MFA Art & Humanities with distinction (and the academic award) from Duncan of Jordanstone College of Art and Design (DJCAD) / University of Dundee, Scotland in 2016.  Her international art career includes group and solo exhibitions and residencies including two years at DJCAD, a month long residency at SBCSJU in Minnesota, USA 2017, The Arctic Circle, Tall Ship Expedition Residency 2018 in the high Arctic and the year long ESCAPIST Mentorship Program in Houston, Texas, 2020.  Her work has won her three awards and several publications (Black & White Magazine 2015, 2016) a finalist position for the Hariban Award, (collotype study award at Benrido Collotype Atelier in Kyoto, Japan) and international collectors.  Her most recent solo exhibition called 'BETWEEN' showed in 'FreshAyr' in 2019 and 'Dock Street Studios' Gallery in Dundee, 2020.