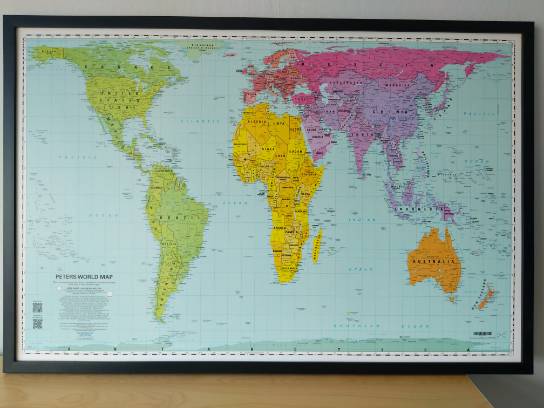 According to Oxford Cartographers, five thousand years of human history have brought us to the threshold of a new age. It is an age typified by science and technology, by the end of colonial domination, and by a growing awareness of the interdependence of all nations and all peoples. Such a moment in history demands that we look critically at our view of the world as portrayed by the World Map. Surprisingly, to a significant degree, this view is based on the work of cartographers from an age when Europe dominated and exploited the world.

Thanks to our friends at The Map Center, this framed Peters World Map is an Equal Area cylindrical projection with standard parallels at 45 degrees thus resulting in a distortion of shape which is stretched about the equator and squashed towards the poles, but having the great advantage that all countries are correct in size in relation to each other. Widely used in educational and business circles as an icon of the modern concept of world equality.