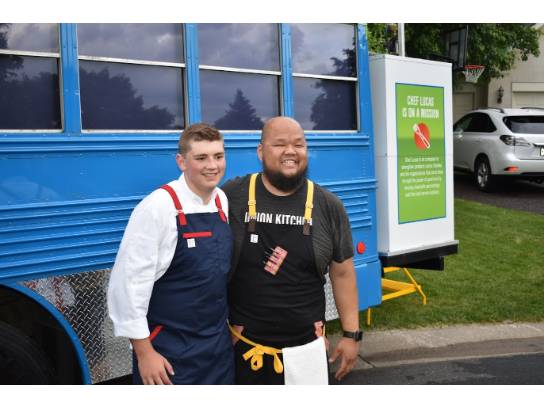 Host up to 8 of your closest friends and family for an incredible food truck experience at your home!

One of seven siblings, Chef Yia Vang was born in a Thai refugee camp where he lived until his family resettled in central Wisconsin. A trained chef who started his career working as a dishwasher, Yia uses food to tell a story and believes that every dish has a narrative. Through sourcing what's in season and combining local traditions with those from his family and cultural traditions, Yia brings Hmong flavors to American palates and invites people to change how they think about food by considering the influences in each bite.

Lucas Hobbs, a childhood cancer survivor and up and coming chef, converted a school bus into a mobile restaurant to serve the cause of those battling cancer in Minnesota. Since going into remission for his cancer five years ago, Lucas has fed thousands throughout the United States, to include three Children's Hospitals nationwide: Minnesota, Tennessee, and North Carolina. Additionally, Chef Lucas has raised thousands of dollars for numerous charities with his Bustaurant, cooking with and learning from chefs like Andrew Zimmern, local Chef Yia Vang and the legendary Carolina BBQ Pit master Ed Mitchell. The Minnesota Vikings and U.S. Bank Stadium named Lucas a "Hometown Hero" in 2017. More recently, Chef Lucas launched the Chef Lucas Pizza food truck and was named a "Ten under Twenty" food hero in the United States by Hormel Foods and Harvard University.