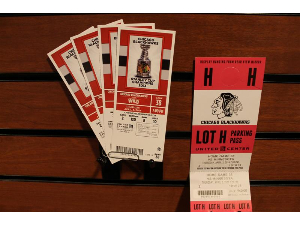 4 tickets for the Chicago Blackhawks vs Minnesota Wild on Thursday, April 3rd at 7 PM each ticket is valued at $127.00, plus a parking pass for Lot H of the United Center.