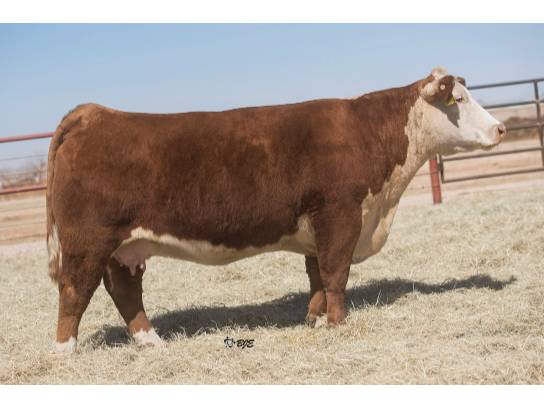 One of the most powerful producers in the history of Bradley Hale's great program, Donor 824 was a real beast and another great product of the Hale 0002 foundation! 824 was arguably the most impressive of 0002 whose daughters have produced a number of Texas major champions, just like the other 0002 daughters in this offering.

Donor 824 is a maternal sister to BH 3011 and to Hale Donors 3012 and 3014 and to Hale 841 and Hale 756, the donors featured in Lots 215 and 213. Both the Champion Polled and Horned Hereford Steers of the 2014 Ft. Worth Stock Show stem from this great cow family plus Donor 824 produced the Reserve Champion British Steer at San Angelo in 2017 plus the Reserve Hereford Steer of the 2013 San Antonio Stock Show.

This cow produced the top-selling Hereford bred heifers of our 2014 Share the Future Sale, a $5,900 Kawlija daughter this past spring, and Donor 824 is the dam of a string of top steers at Hale's the past few years including two sons by Right On at $25,000 and 4 brothers that averaged $8,125.

This is the Hale foundation and Kalija x 824 females are some of the most powerful producers in the Hereford game!