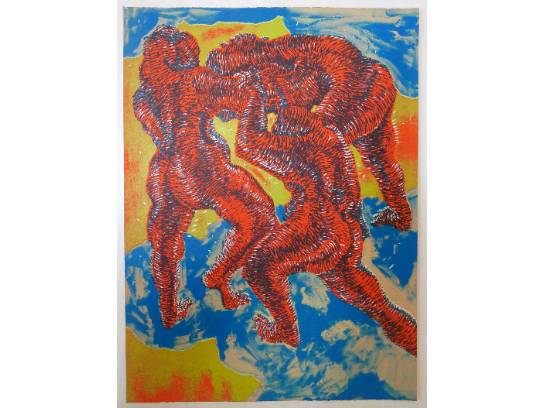 Didier William's paintings are concerned with blackness and other identities subjected to an othering gaze and socioeconomic oppression, drawing on his experiences of immigrating to the United States from Haiti. His works embrace traditional conventions of painting in their size and planarity, but integrate collage and mixed media to reflect to layers on meaning in each piece. Didier's exploration of the gaze, Haitian Voudou, history, folklore, and identity is expressed through works that depict human figures.[1][6] His Curtains, Stages, Shadows series (2017-2018) was in part inspired by events surrounding Trayvon Martin, an unarmed teenager who was shot to death in 2012. He is currently working on a large-scale project related to Curtains, Stages, Shadows for 2020.

Didier William is originally from Port-au-Prince, Haiti. He earned an BFA in painting from The Maryland Institute College of Art and an MFA in Painting and Printmaking from Yale University School of Art. His work has been exhibited at the Bronx Museum of Art, The Museum of Latin American Art in Long Beach, The Museum at the Pennsylvania Academy of Fine Arts, The Carnegie Museum, Crystal Bridges Museum of American Art and The Figge Museum Art Museum. He is represented by James Fuentes Gallery in New York and M+B Gallery in Los Angeles. William was an artist-in-residence at the Marie Walsh Sharpe Art Foundation in Brooklyn, NY, a 2018 recipient of the Rosenthal Family Foundation Award from the American Academy of Arts and Letters and a 2020 recipient of the Joan Mitchell Foundation Painters & Sculptors Grants. He has taught at several institutions including Yale School of Art, Vassar College, Columbia University, UPenn, and SUNY Purchase. He is currently Assistant Professor of Expanded Print at Mason Gross School of the Arts at Rutgers University.