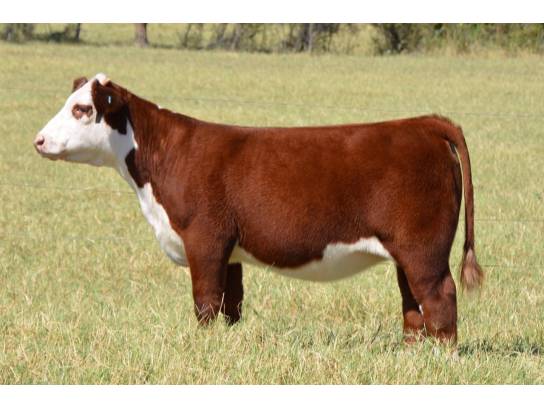 Lot 3 is stacked with proven cow families known for producing champions on the top and bottom side of her pedigree. Her dam, KLD RW Lady Rolex D19 was selected as the Reserve Grand Champion Polled Hereford Female at the 2013 National Western Stock Show. A maternal sib to lot 3 includes KLD EB Trump D58, the Grand Champion Polled Hereford Bull at the 2018 National Western Stock Show, Reserve Grand Champion Hereford Bull at the 2017 American Royal and 2017-2018 Polled National Show Bull of the Year. Her sire, KLD RW Bouncer D41 ET was the Champion Bull at the 2016 North American International Livestock Exposition and the 2016-2017 Horned Show Bull of the year for the Southwest region and also awarded the National Horned Show Bull of the year. This female's paternal great granddam is RW Mindy 3078 6096, the highest income producing donor cow in the KLD program and dam of many past champions. Lot 3's feminine front end, combined with her added stoutness, pigmentation and dark cherry red color is sure to catch any judge's attention.

Kirbie Day Sims is retaining the right to two flushes (minimum of 6 transferable embryos per flush) by a certified embryologist at buyer's convenience and seller's expense.