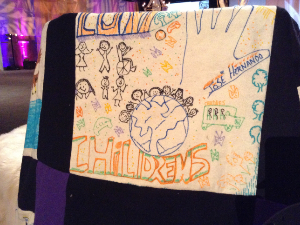 What can be more precious than a hand-made quilt composed of children's artwork? The animal-themed printed quilt was put together by Christina Wilbur along with the children of Bear Necessities' artwork during their stay at the hospital. Take home this one of a kind quilt today. Donor: Christina Wilbur