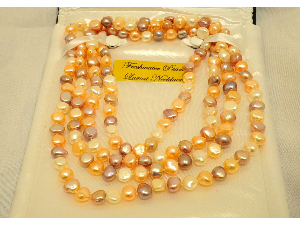 You will feel wonderful with this Lariat Pearl Necklace glowing around your neck. From a renowned designer in Palm Beach, where luxury and elegance reign, this Multicolor Baroque Freshwater Pear necklace is sure to have you standing out in any crowd. With 7-8 mm pearls and a classic elegant look, you'll definitely be remembered. Donor: House of Kahn Estate Jewelers