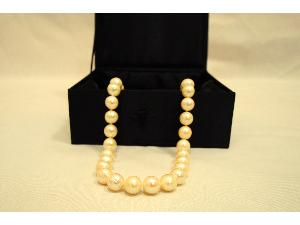 This 23-inch, white, round baroque pearl necklace with a brushed gold-plated sterling silver feature clasp is sure to become a staple in your wardrobe! The pearls are not exchangeable or returnable. Donor: Jan Lee Design