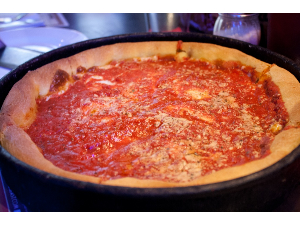 Grab some cheap eats in the city with a $30 gift certificate redeemable at any Gino's East location. There is also a $50 gift card from the Mystic Restaurant Group redeemable at Corcoran's, Emerald Loop, Monty Gaels, Vaughan's Pub (in Chicago and Lake View), and Mystic Celt! Donor: Gino's East, Mystic Celt Bar & Grill