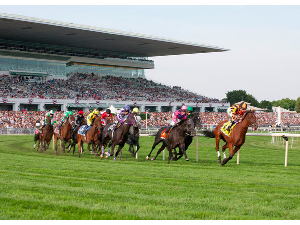 Whether you're looking for a fun and exciting day out with friends and family, a casual and charming afternoon at the races, or a sophisticated and stylish get-together, Arlington International offers an extraordinary experience for everyone! Host a "Day at the Races" with reserved Clubhouse Box Seating for six, during the 2014 racing season. This is not valid on opening weekend, Mothers Day, Memorial Day, Fathers Day, Independence Day, the International Festival of Racing, (Arlington Million) weekend and Labor Day. This must be redeemed during the 2014 horseracing season. Donor: Arlington International Racecourse