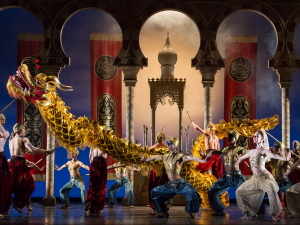 Enjoy the Houston Ballet's performance of Aladdin, a magical tale of love, trickery, and triumph choreographed by David Bintly with two tickets for the Houston Ballet performing at the Auditorium Theatre of Roosevelt University. After the show have dinner at a Phil Stefani restaurant with this $100 gift certificate. The only performance date is Saturday, March 22, 2014 8:00 pm. The winner must call by March 12, 2014 as tickets are not guaranteed after this date and are subject to availability. This gift card cannot be redeemed at Tavern on Rush, Luigi Stefani Pizzeria, Crystal Garden/Chango Loco, Catering by Phil Stefani Signature Events and expires March 8, 2015. Donors: Auditorium Theatre, Phil Stefani Signature Restaurants