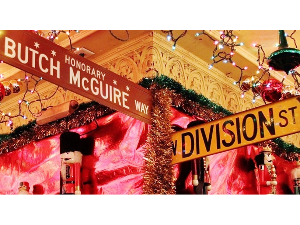 Enjoy a party with delicious food and drinks! You have the wonderful choice of party option one which includes a cocktail party for 25 people featuring mixed appetizers and a call bar for two hours - OR - option two which includes Bob's four-course BBQ dinner for 12 . The meal featuring appetizers, salad, fried chicken: Butch's own totally awesome fall-off-the-bone baby back ribs and yes...dessert! This extraordinary offer is not valid the week of St. Patrick's Day, or between Thanksgiving and New Year of 2014. The party must be booked at least 21 days in advance. This certificate expires February 28, 2015. Donor: Butch McGuire's