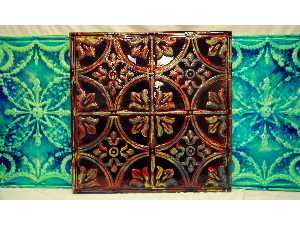 Reflect your good taste with this stunning collection from Kim Riley. These antique replica ceiling tiles are hand-painted and truly one of a kind. Each of the three tiles measures 24 1/4" x 24 1/4" and can be used as a wall hanging, table top, ceiling tile and more. Use this opportunity to add a little good taste to your home! These tiles are not returnable or exchangeable. Donor: Kim Riley