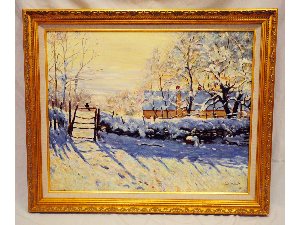 From the artistic design of Claude Monet, comes this Beautiful piece, The Magpie, masterfully reproduced by the famous Carla Inwood. This 24''x 30'' painting on oil-primed linen canvas will be sure to catch everyone's eye. This painting is not returnable or exchangeable. Donor: Art by Carla