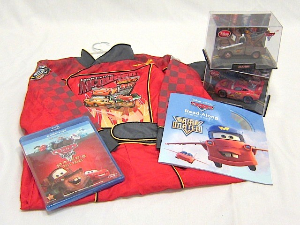 Does your child have the need for speed? Then this "Lightning McQueen" size 4 racing jumpsuit is just for you! Along with the jumpsuit comes a Lightning McQueen boxed car, Mater boxed car Blu-Ray DVD and a $100 gift card to the Disney Store. Donor: Michael O'Meara, Water Tower Dental LTD