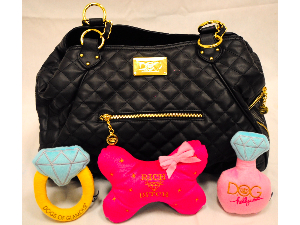 Uptown, downtown, midtown, or out of town, this sleek carrier is destined to become the foundation of your urban, on-the-go life. Add a little class to your look with this oh-so-adorable classic tote dog carrier from DOG. Crafted from faux leather and featuring top and side ventilation, signature lining, front storage, with a faux fur inner pad, this fashionable bag adds pretty, practical style to both you and your dog. Surprise your best friend tonight! This is not exchangeable or returnable for cash. Donor: HumbleBeasts