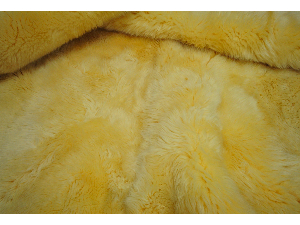 You already know that you have the perfect space to showcase this luscious area rug. Can't you just imagine what it feels like under your bare feet? Whether you set it by the fireplace or TV, or display it in the living room, the 3-inch pile of luxurious lambskin fur will make your whole house feel softer. The 100% cotton backing will keep the 6-foot rug in place, whether you place it on a carpet or bare floor. It looks so pretty and feels so good, you'll wish you bought it sooner. It measures 6-feet round. Imported. Not all sheepskin rugs are created equal. At Overland, we specialize in premium-grade Australian sheepskin rugs. Donor: Overland