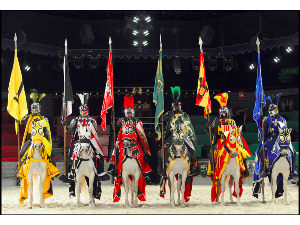 Treat your brave knight to the revelry and feasting that is Medieval Times Castle in Schaumburg, IL. You will have two general admission tickets to Medieval Times Castle, including dinner, beverages and the live show. The fun doesn't stop there! Redeem this $50 gift certificate at Party Time Palace on west Golf Road in Des Plaines. Kids can't get enough of this place where there is fun and excitement for kids and grown-ups alike, with over 20,000 square feet of non-stop entertainment. Advance reservations are required and subject to availability. Expires 9/30/14. Donors: Medieval Times, Party Time Palace