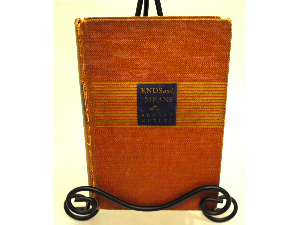 This signed 1937 Harper & Brothers Published edition of "Ends and Means; An Inquiry into the Nature of Ideals and into the Methods Employed for Their Realization" will spark many conversations in your home or office! Donor: Aldous Huxley's Ends and Means