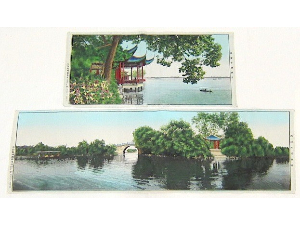 Grace your home with two, stunning, hand-embroidered silk works of art. These pieces are from the famous West Lake region in Hangzhou, China. The vintage works were crafted by artisans in 1970. They are unframed and measure 23 ľ" W x 11" L, and 38 ˝" W x 11 Ľ" L. Donor: Myra Snyder