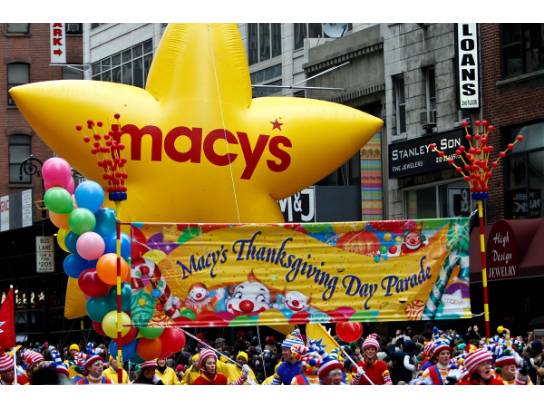 Please note this package can only be used in fundraising events prior to September 28, 2019.

Watching the parade on Thanksgiving morning is a holiday tradition for many, as more than 50 million people catch it on television each year. Another three million people line the streets of downtown New York City, but you can watch it from an indoor VIP venue along the 2-mile parade route, which begins on Central Park West at 77th Street and travels south on 6th Avenue, crossing 42nd Street and ending at Macy's Herald Square on 34th Street.

The parade started in 1924 by Macy's department store employees. Many were first-generation immigrants who were proud of their new American heritage and wanted to celebrate with the type of festival their parents had loved in Europe. Employees and professional entertainers marched from 145th Street in Harlem to Macy's flagship store on 34th Street dressed in vibrant costumes. There were floats, bands, and live animals borrowed from the Central Park Zoo. Large animal-shaped balloons replaced the live animals in 1927 when the Felix the Cat balloon made its debut. The parade became a permanent part of American culture after being featured in the 1947 film, Miracle on 34th Street.

Macy's Giant Balloon Inflation, open to the public the day before Thanksgiving, is a must-see event for parade fans who want to see the spectacular balloons up-close.

Must be booked a minimum of 60 days in advance. Certificates cannot be replaced if lost, stolen or destroyed. All purchases are non-refundable. Packages cannot be resold. Ground transportation is not included.