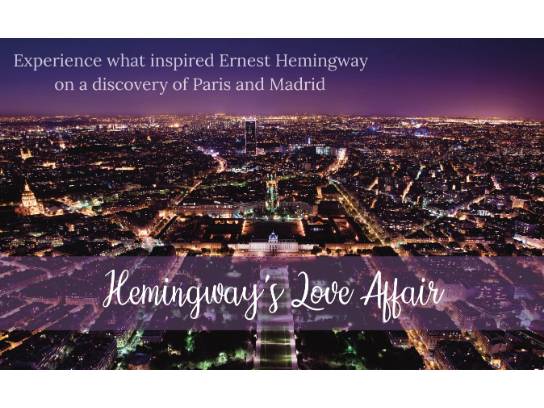 Your journey begins with three magical nights in Paris where you will walk in the footsteps of Ernest Hemingway.

One exciting day, you will head back in time to learn about the life and times of one of the great artists of the 1920s era. You will explore the famous neighborhoods of the Latin District, Montparnasse and Saint Germain des Prés. Sites include places where Hemingway lived, worked, drank as well as his favorite strolls where he drew his inspiration for books such as Death in the Afternoon and The Sun Also Rises.

From Paris you will head to beautiful city of Madrid which he called "the most Spanish of all cities". "Don Ernesto," as he was known to the Spanish had a love affair with Madrid and the feeling were mutual. You will experience all that drew Hemingway back again and again to this dear city. One day relive history, visit his most treasured and written about sites, favorite bars, famous restaurants and marvel at his passion for bullfighting. Feel swept away by your surroundings as you get a glimpse into the life of Ernest Hemingway.

Your seven-day trip for two includes: