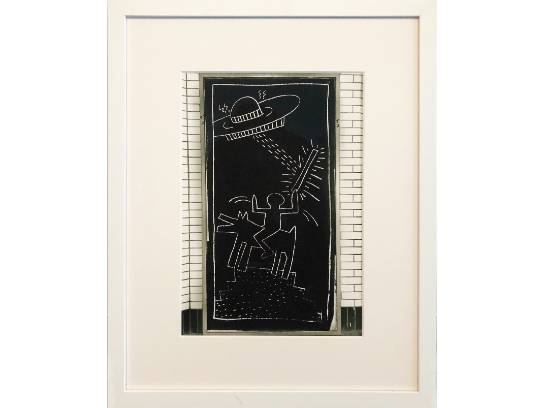 From the collection of John Jay, this photograph captures Keith Haring's epic conquest, producing public art across the New York City subway platforms during the early 80's. Haring intended for these drawings to be temporary works of display. These famous chalk drawings briefly inhabited blacked-out advertising boards before being covered up by advertisements; what little remains of this project exists solely in the posterity of myth.

New York based photographer Fernando Natalici is best known for his iconographic documentation of the downtown Manhattan art scene of the mid/late 70's and early 80's. Natalici's portfolio includes sought after images of a young Patti Smith, Blondie, Talking Heads, Keith Haring, Jean-Michel Basquiat, The Ramones and more. As an Art Director, Fernando has played a key role in creating memorable visuals for historic NY venues such as CBGB's, The Mudd Club, Area and Danceteria.