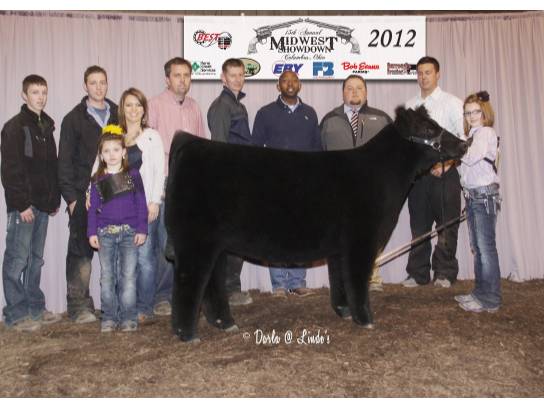 BABY CALF ALERT these embryos are mates to some of the best on the ground now!
To put it simply, this cow is one of the most powerful show calf producers in the country. All she has is high-selling, big-winning quality. She is great enough to be cloned and even her clone gave us a great calf in her FIRST attempt - see Lot 18 in this sale.
Rihanna 4Y "Winnie" is perhaps I-80's great daughter. She was a dominant show heifer and she might be the biggest reason that I-80 sold so much semen. She was great then but she is way, way better now.
This cow is already the source of great steers like huge sellers and winners for the Boerson, MI, and Vickland, CO, families a couple seasons ago, and she did it again this year with Business Done Right.
Previous calves from "Winnie" include Win Dixie 8B, the most decorated Maine-Anjou female of the 2014-2015 show season when she won the both calf divisions at the American Royal and the NAILE and went on to be Grand Champion of the 2015 American Royal Open Show and Reserve Champion of the Junior Show before she was Grand Champion of the NAILE Junior Maine-Anjou Show and Reserve Champion of the Open Show.
Another sister was the Chamberlin girls' incredible Bismarck daughter from 2016-2017 that won nearly every heifer show there is to win. Supreme at the Hoosier Congress and Kentucky Expo plus Champion MaineTainer of the 2017 Indiana State Fair and both the junior and open shows of the American Royal to name a few.
Another daughter of this cow is "Kiki", the $53,000 Calf Champion Female of both the junior and open shows at Kansas City and Louisville in 2015 - she made her Frozen Gold debut here in 2018 for Gensini and Wisnefski, IL. And yet another full sister topped the 2017 OMAA Sale at $18,500 to Dickson, OH, and promptly won Reserve Champion in Ohio Expo Junior Show the next day.
Those heifers are full sisters to X-Rated, the now-deceased $30,000 top-seller of our 2016 sale.
More top calves include a winning heifer for Macie McCollum, TX, the top-selling bred heifer of the 2017 Winners' Circle Sale, and the top-selling embryos of our 2016 Frozen Gold plus a great crop on the ground again now by multiple sires.
Grab these while you can. Winnie is the rarest of the rare and she will not be available forever.