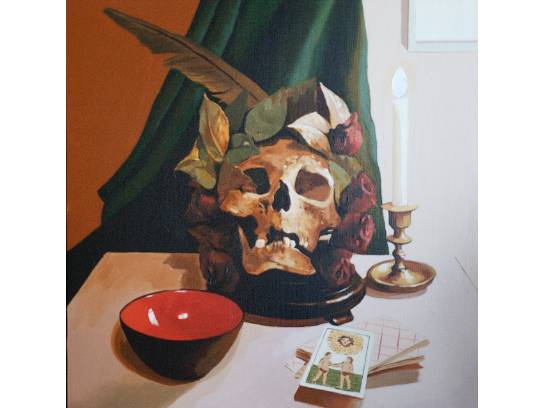 In 1971 the Dead introduced a slew of new songs in concert which never got a proper studio recording. The plan was to record an album tentatively titled "Ramble On Rose" in the folksy, Americana style of "American Beauty" and "Workingman's Dead", both released in 1970. Unfortunately the album never materialized due in part to the failing health of keyboard player/vocalist Ron "Pigpen" McKernan. Many of these songs turned up on 1971's eponymous live album "Grateful Dead" (aka "Skull and Roses" or "Skullfuck") and the live double album "Europe 72".

I decided to imagine that the album was in fact recorded and released and have designed a cover for it. I borrowed a line from the song Jack Straw for the title "Ain't that Heaven Sent".

I've compiled a Spotify playlist consisting of live versions of the songs. Search for "Ain't That Heaven Sent" by Christopher Sousa.

Bidding on this item will close at 4pm on Sunday April 14. All bids, including those placed at the Schoolhouse on the day of the party, will be made through the GiveSmart site. This means that absentee bidders will be able to participate right up to the close of the auction, and the highest current bid will be visible on GiveSmart.