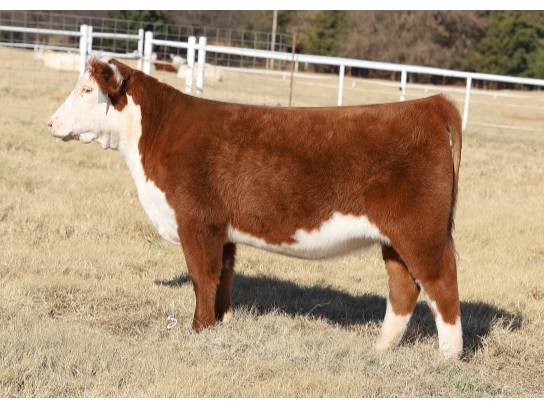 A direct daughter of JCS Tater Tot 3560 the 2015 Horned Grand Champion Female at the National Western Stock Show. Flawless from the ground with tremendous depth, dimension and eye-appeal. This April Horned heifer can stand some heavy competition and if anything like her sisters she will stand in the backdrop multiple times.
A March maternal sister topped our October online sale capturing $55,500 for ˝ interest and another February maternal sister was the co-second high seller at $11,500.
Britt is a maternal sister to the Grand Champion Horned female at the 2018 Oklahoma Youth Expo and the 2017 Tulsa State Fair both exhibited by the Sims Family. The Taylor family exhibited a full sister and claimed Reserve Champion Polled Female at the 2018 Oklahoma Youth Expo. The Wheeler family exhibited a full sister at the 2017 Western Nugget in Reno and captured the honor of Reserve Grand Champion Female in the Junior Show.
A full brother was the Reserve Grand Champion Bull at the 2017 Fort Worth Stock Show and has been admired by many breeders across the states for his eye-appeal, square hip, bone and structural correctness.
What a great opportunity to acquire a direct daughter of the ever-popular 2015 National Western Stock Show Grand Champion Horned Female!

Retaining the right to 1 future flush with a minimum 6 transferable embryos at the buyer's convenience and the seller's expense.